I’m sorry that this post is going up so late. I just was caught up in things here and there. But I finally pushed myself to write, and for the bloggers out there, it isn’t easy. 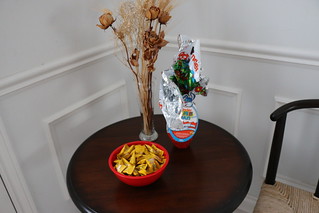 I guess my dad wanted to stick with the dinner theme (Easter, if you haven’t noticed) and kind of (I guess) decorate the house. The big (Kinder Surprise) Easter egg was for Juliette (my cousin’s daughter). We spoil her (a lot), as you can see. I don’t remember my dad giving me that big of an egg, although he claims that he has, just when I was younger. 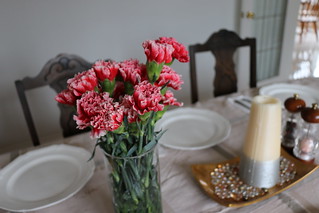 If you have been reading some of my latest post, I said that flowers are one thing that adds something more to family dinners. Fresh flowers can be expensive, but it can never hurt to have them around once in a while. 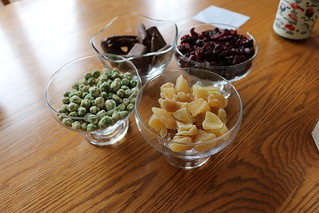 I guess my family’s not really into appetizers for guest entertaining. Or we always serve the same snacks. Starting with the bottom left and going clockwise: wasabi peas (almost available in most grocery stores or bulk food stores), chocolate wafers, dried cranberries and dried ginger (from Trader Joe’s). 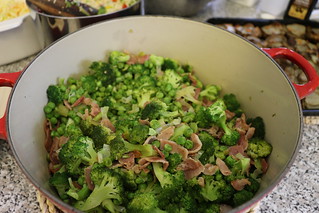 My own twist on Martha Steward’s Peas with Spinach and Bacon in Lettuce Cups. Obviously, I decided not to have lettuce wraps and substituted the spinach with broccoli heads. 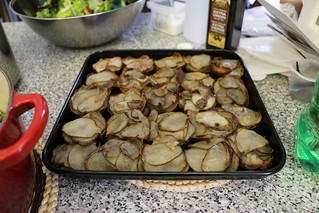 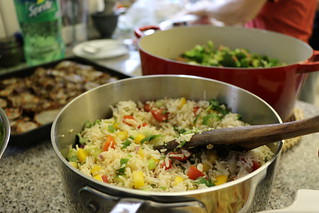 Another twist on Martha Steward’s Wild and Brown Rice Salad. Aside from using basmati rice (instead of brown), I basically followed the recipe (I usually don’t!). 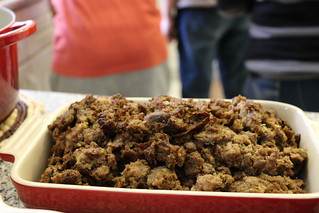 Dennis recreated my aunt’s stuffing. I honestly don’t know what’s in there. 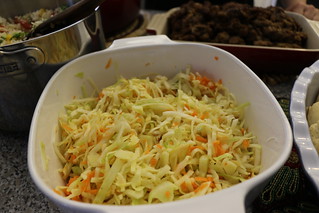 Coleslaw from the show, The Main (Food Network Canada). I’ve tried so many coleslaw recipes and this seems to satisfy my dad’s taste. 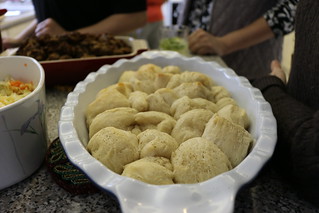 Click here to read how I made these dough bread buns. 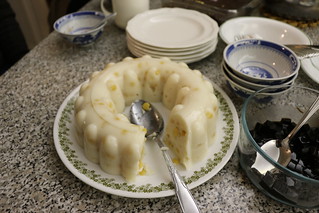 Dennis also made dessert (although he can’t have it). Split pea pudding with coconut. It’s really simple to make but it contains a lot of corn flour. Maybe not the greatest choice in dessert. My dad is always complaining to my mom about not making this for him. 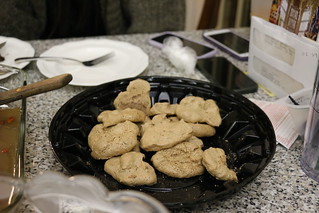 These are called Chocolate Chip Clouds (by Skinny Taste). It’s basically egg whites (like a meringue) but stickier when bit into and filled with chocolate chips.Surprisingly, I kinda fancy them (British term for ‘like’) cause I love chewy food. 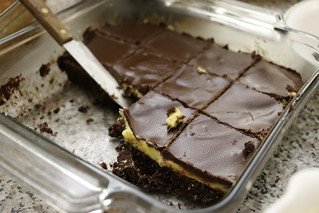 My other cousin chose to make brownies. Everyone was asking her for the recipe but she just bought a box of mix to make the brownies. Either way, delicious.

There was more food than I have documented here. I forgot to take photos of them, because I was just too busy that day.

*The recipes used above does no belong to me and have been used for leisure purposes.

In my opinion, I think Japanese and Korean cultures are very similar. Not only with the manners, celebrations but also in the food that both cultures have to offer.

I recently stopped by J-Town which has an authentic Japanese grocery store, Heisei Mart (I recommend visiting the bakery too because they have the best bread on the planet), to pick up some groceries 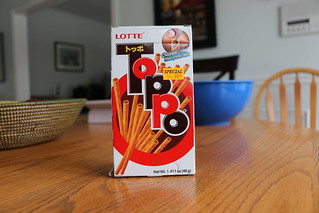 I love grocery shopping by myself, getting lost in the store but finding something new every time. At Heisei, there’s always something on sale, the store even has a table solely for on sale items. I love finding new snacks, like the one above, I just had a pack today. If you’re familiar with Lotte, the company makes a whole range and variety of snacks. I’ve been eating similar snacks like this when I was wee little. 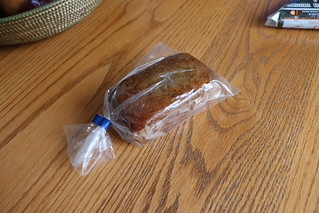 Ain’t that the cutest banana bread? I saw this at the bakery and had to get it. It was so light and fluffy, I could eat it for days. I need to know what makes them THAT delicious! 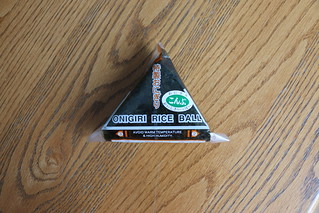 Onigiri is something recently new and has been popular amongst my high school friends. It’s basically rice and seaweed wrapped together and fillings such as salmon, plum, tuna. The neat thing is that there’s a plastic between the rice and seaweed, so that seaweed is kept fresh from the rice. 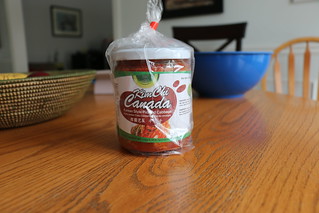 My main purpose of going to J Town was to get some kimchi. It’s basically fermented cabbage. It’s sweet, sour and spicy all in one go. My family and I had a Korean dinner that night, and when we do, we usually have kimchi on the table, as a side dish to compliment the other foods.

Whenever my family visits my relatives in Sarnia, we always bring tons of Chinese food in, cause there’s hardly any good Chinese restaurants or Chinese food in general (on the table: roasted goose, duck, veggies, fried tofu, steamed fish).

Things are bigger and ‘badder’ in Sarnia. No more soaking vegetables in a bucket, rather than plugging the sink. PSSH! And everything gets soaked together, never mind sorting the veggies and soaking them individually.

My aunt randomly decided to make us cheesecake. Every time we visit her, she would bake us two apple pies and a cream pie. We’re just big fans of pies, my family. And after an hour of baking and whipping cream, her cheese cake was complete. She follows no recipe but still manages to successfully fill our bellies to their maximum capacities.

After dinner, there are always plenty of fruits and more food on the table, even if the fruits aren’t in season.

This WAS Sunday’s lunch, before we headed home. It kind of reminds me of the English, where they would have Sunday roast. It is roast, turkey roast, but for lunch. Fried potatoes (my aunt always make the best), roasted turkey, stuffing, brussel sprouts, mushroom gravy. Even for lunch, the table is filled with so many dishes (although there were 9 adults and a 2 year old  to feed).

So when ever we head into Sarnia, it’s all about family and food. : )
Catch my post on Sarnia in February  where I blogged about Sarnia’s amazing view and nature.