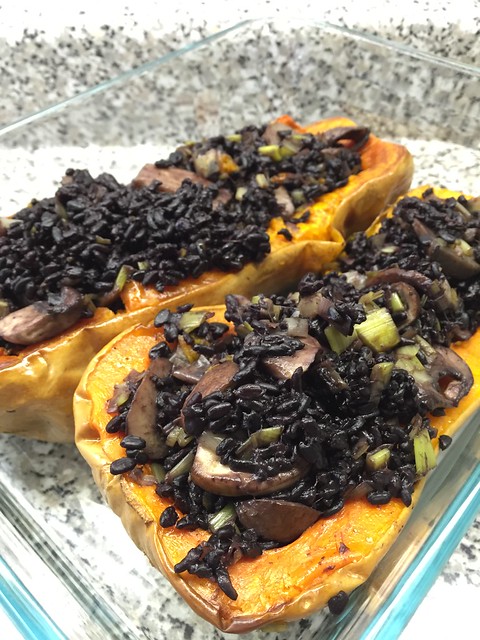 Of the times that I’ve attempted to make something healthy, I’ve failed more than I have succeeded. Either being really lucky or just simply easy, this stuffed butternut squash fell within the two. And I’m amazed at how well this dish turned out to be (the presentation is perfect too). With garlic, mushrooms, leek, black rice and a squash, this is definitely a good side for a fall or wintery dinner. I wasn’t sure how the leek would turn out, as I’ve had it before (it can sometimes be too onion flavoury). I guess it was just in the wrong dish. This is surely going on my to-make-sides whenever I’m having trouble planning a meal (with too many meats and not enough vegetables).

My mom grew some vegetables in the backyard this summer. And she recently picked tomatoes from the garden.

This is HUGE, but kind of reminds me of two butt cheeks.

She got 2 big green tomatoes.

Compared to a kiwi.

Before the summer months ended and before I harshly needed to go back to school, there were a couple of things that I wanted to do with my family. This included going back to Sarnia to visit my family which consists of my uncle, aunt, cousin and her family. I know that I just recently visited them in Sarnia (I just looked through my photos, and hurrah), world record shows that my family and I went to Sarnia TWICE within the month of August! I guess, I just wanted to get away from my city life and being a city girl can be difficult because it comes with stress and constant reality check. I found it nice to get away from my city life and to have spent a few days with family I don’t often see is certainly a pleasure.

With that all being said, we went to TWO different farms; a fruit and vegetable farm and an animal farm.

So I guess this goat was hungry and started to nibble my tshirt.

Jennifer obviously disliked the goat jumping on her.

The goats are just too cute.

Sarnia might not seem like a big place..as there are limited activities to do. But visiting almost every summer when I was younger, I definitely had many memories that I won’t forget. One of the most “famous” things to do in Sarnia is going to eat “Under The Bridge Fries.” If you aren’t familiar with the location of Sarnia, it’s a city that borders between Canada and the States, obviously on the Canadian side. So there is the ocean the separates the two countries and a nice boardwalk to stroll along and there is a fish farm by the waterfront. I don’t remember name and failed to successfully search the name of the fish farm, but we spent a bit of time feeding the fish.

25 cents gets you a handful of fish food. Bring hand sanitizer or wipes, because the fish food smells.

After feeding the animals at the farm and the fish, I’ve realized that it’s important to take note of what we humans feed other species. It’s nice having a blog to remember and express my food experiences, but for example, this visit to Sarnia is what I value the most. City life is too focused on us humans..it’s nice to have a change in perspective at times.