Quirky and cute! That basically sums up this taco joint, located near Yonge-Dundas Square. And today was the perfect day to enjoy a variety of tacos while looking out at the not-so-busy Dundas St East. 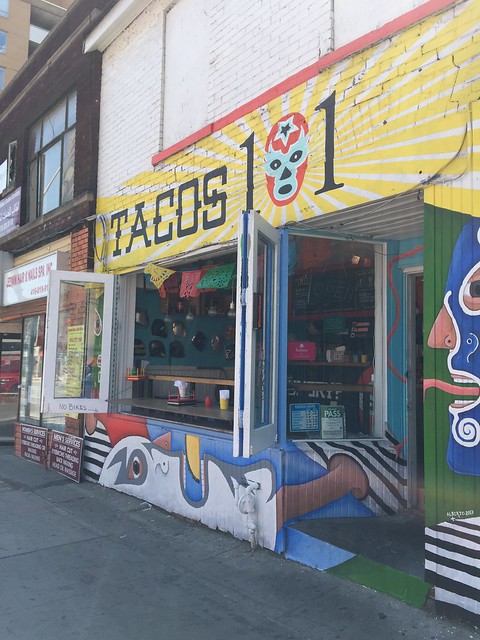 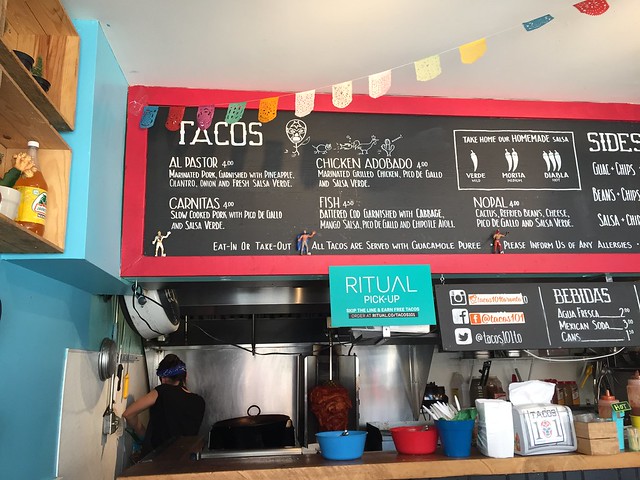 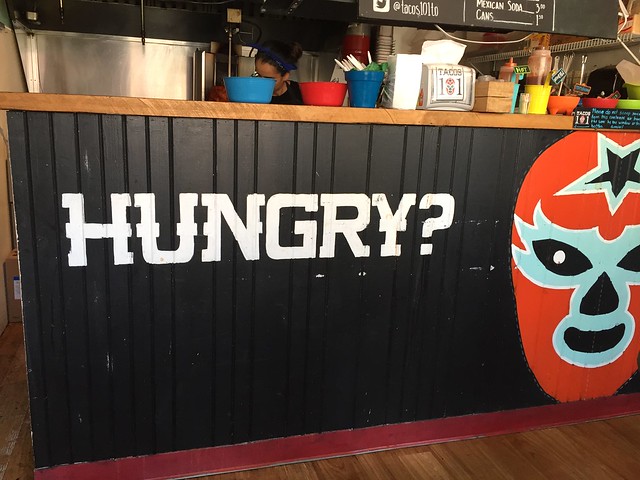 It was just my mom and I, so we decided to order three different types of tacos and a side of beans and chips. From top right and going clockwise: fish, chicken adobado and nopal.  I really enjoyed the chicken, it was nicely marinated and moist. I wasn’t crazy about the fish, although I could taste the freshness. The nopal (vegetarian) was marinated pickled green beans, not bad too. I originally wanted to order the al pastor (pork) but it wasn’t ready.  We almost couldn’t finish the beans and chips. I was slightly disappointed as the beans were black beans, not pinto beans (as stated on the website’s menu). We also had a bottle of cold lime soda. Refreshing! Everything was cheap, totaling to $20$. 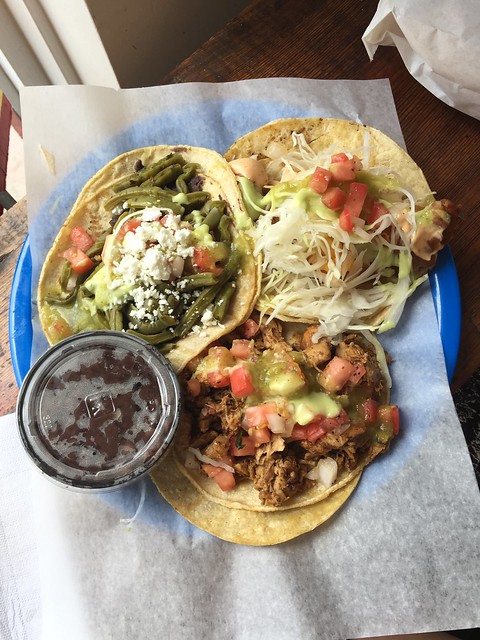 I love the seating view, as you can look out to the street and strangers crossing. It wasn’t a hot day so it was just perfect for a spot of lunch. 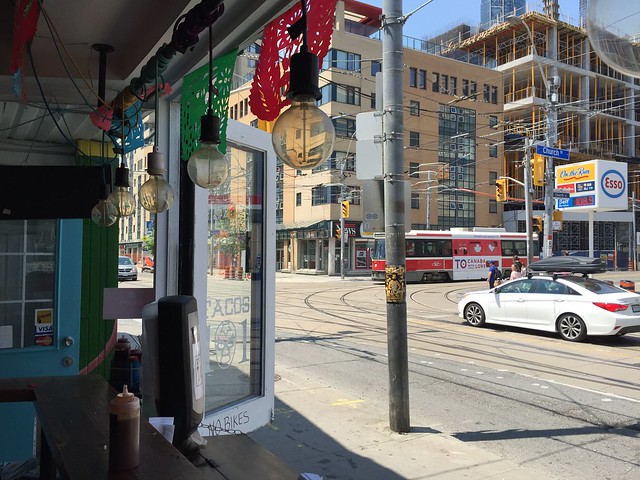 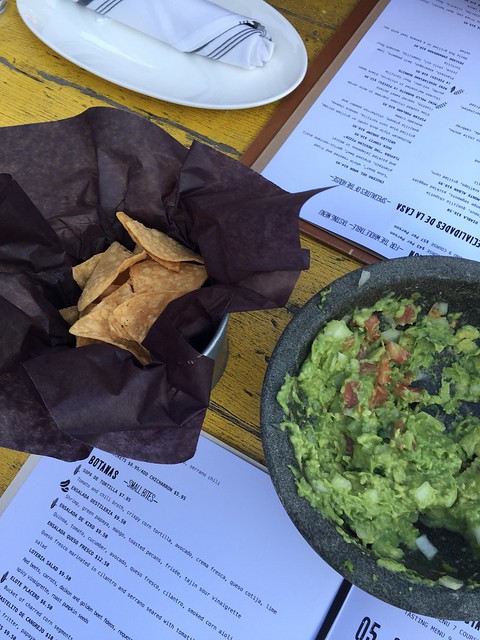 My brother and I love Mexican food (though he doesn’t like avocados). We ditched our parents and made plans with other family members to go eat at El Catrin at the Distillery District. Thankfully the weather was in our favour as the weather forecast had predicted rain (yay!).

We got to the restaurant around 6:30. I had called earlier to see if I could reserve a table, but there was none (this restaurant is always busy). There was a long lineup and we were told that the wait would be an hour, but we only stood in line for about 30 minutes (another yay!). 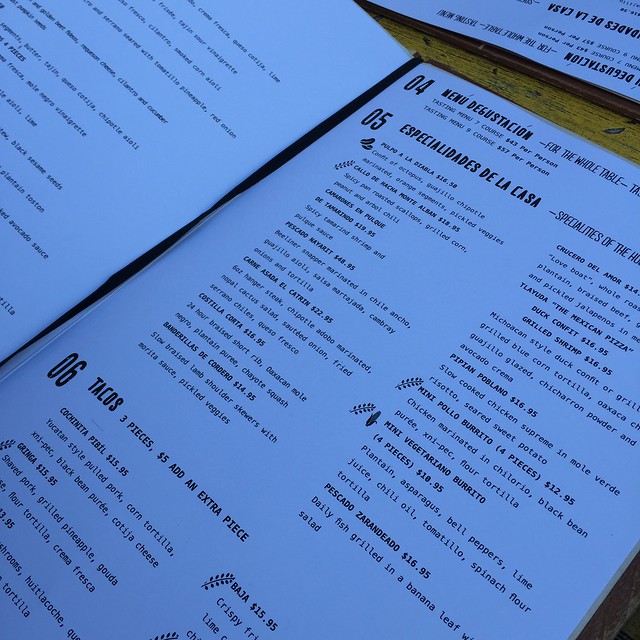 We ordered a tad too much, but everything was appetizing.
Firstly, we had an order of guacamole & chips. The avocados were smashed at the table before our server placed it on our table. 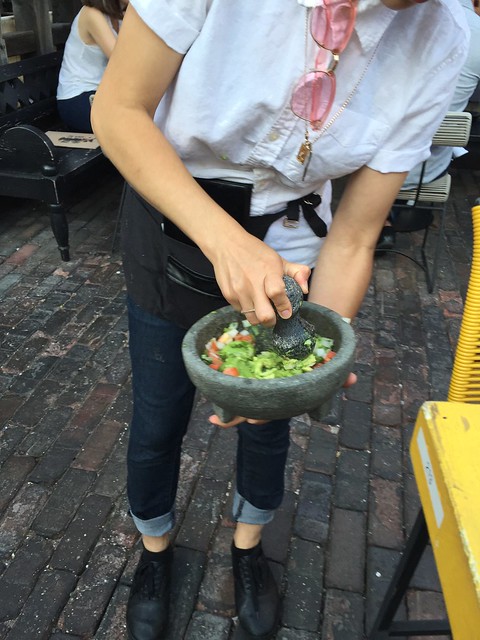 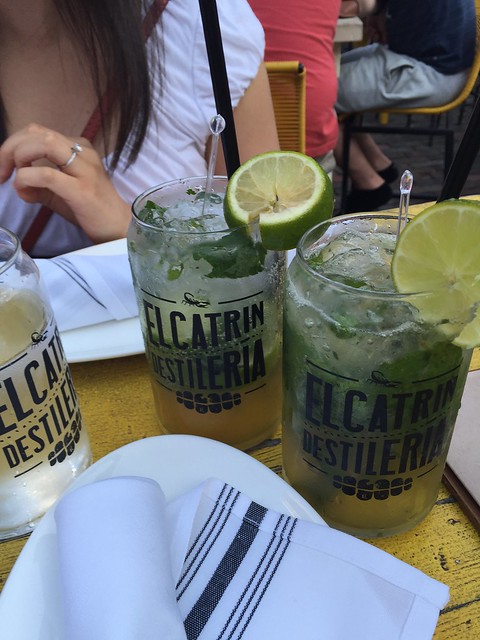 I ordered a tradicional margarita. 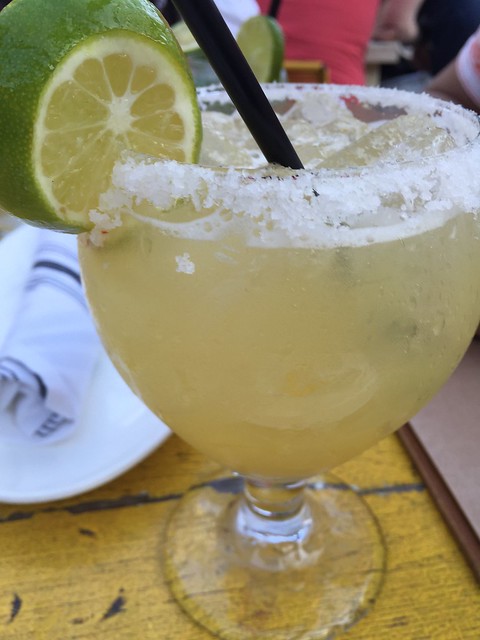 This scallop dish (callo de hacha monte alban) was probably the best dish we had.  The scallop is pan roasted (to perfection) served with corn and a chilli oil. 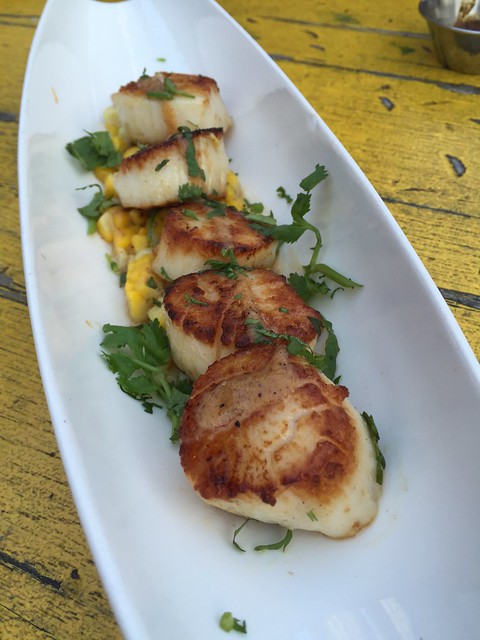 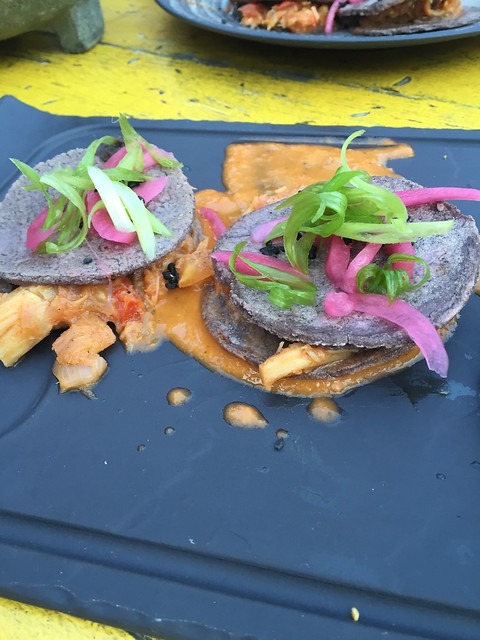 We had to order extra tacos beside each order has three pieces but we had a party of five. Can we just take a second to admire the dish presentation?! The pollo con mole wasn’t something to die for, apparently it tastes like char siu, I didn’t think it resembled the taste. 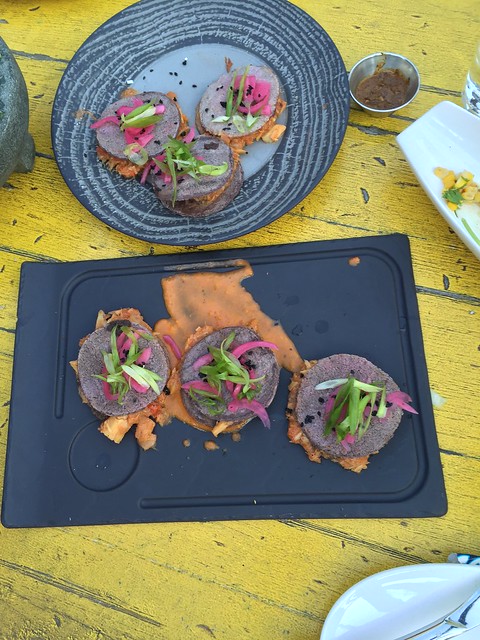 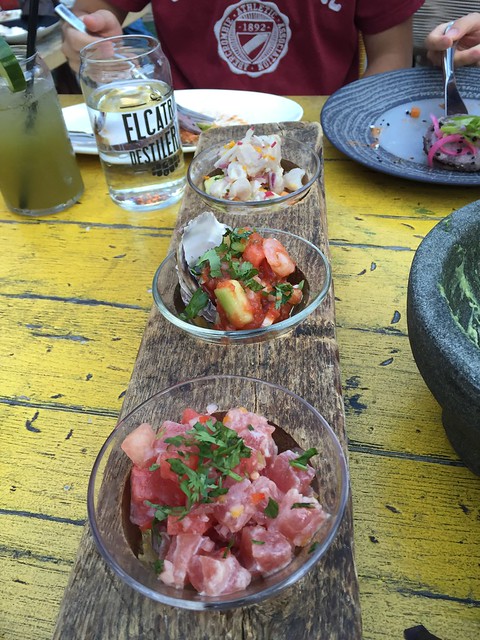 We got a bonus (free) order of pastor tacos (marinated pork, pineapple, red onion and cilantro). I don’t know how it happened and we told the server, but he told us that he would pretend that he didn’t hear us. So thanks El Catrin! 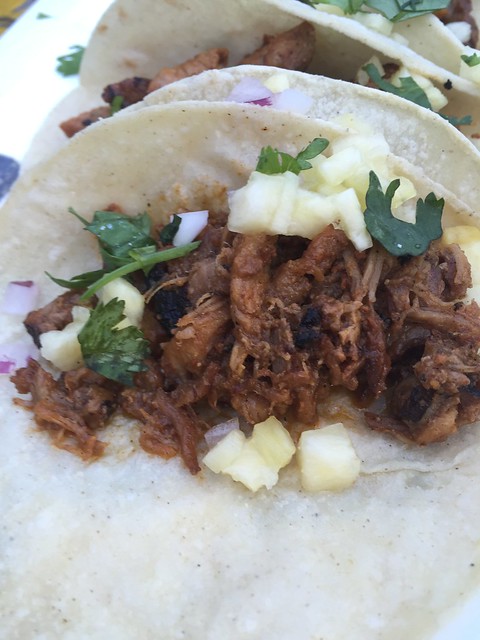 Don’t know how this dish, pipian poblano (slow cooked chicken with risotto and sweet potato), made it on the menu. There was nothing special about this dish. It would seem more of a Sunday roast dish to me. 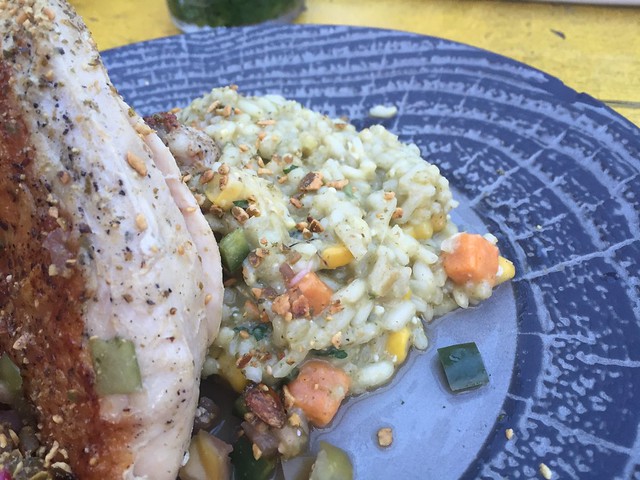 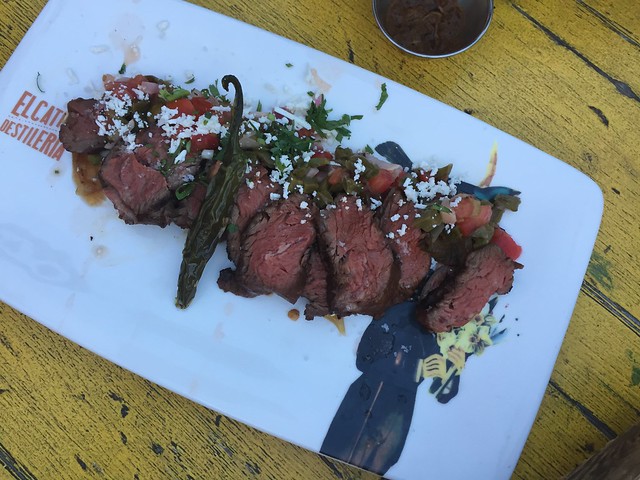 We added an order of crickets (you can add crickets to guacamole as an appetizer). after the boys decided to have a go. I tried it too, as daring as I am. It tasted like Chinese dried black beans. Also spicy. 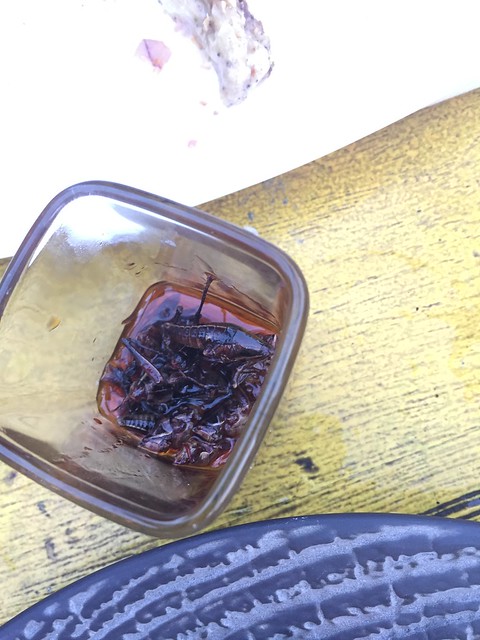 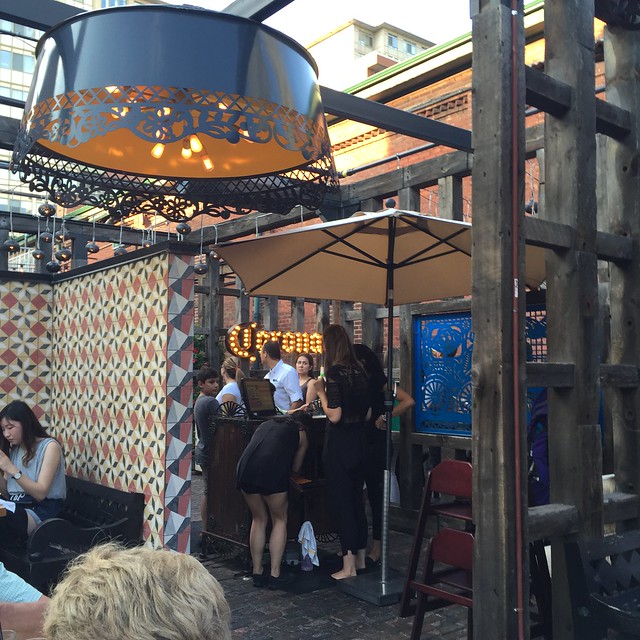 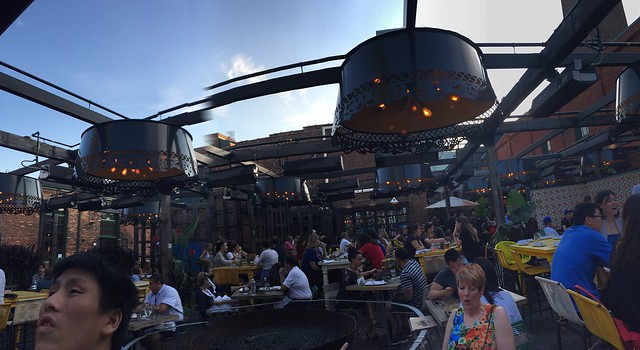 The patio sits more than inside. Inside the restaurant it dark and there are big long tables. As you can imagine, it’s pretty noisy, outside on the patio as well. 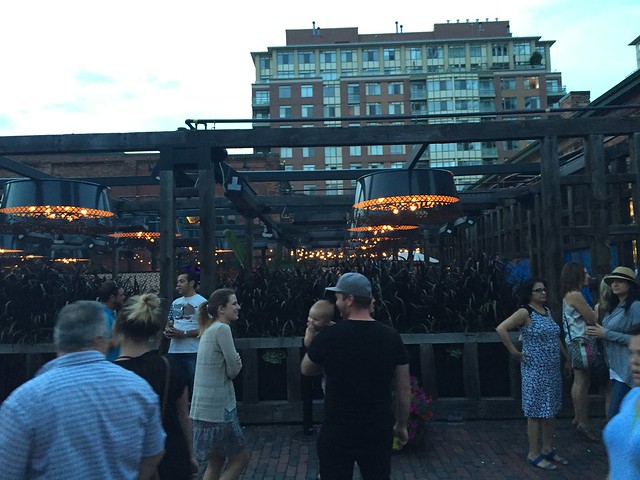 Would I eat here again? Probably not, for two main reasons.
1. Price – the dishes are not cheap. With drinks and tips, it was about $60/ person (we were full though we had that extra dish).
2. Taste – I didn’t find most of the dishes wowing , aoart from the scallop.

With that being said, I would totally recommend eating at El Catrin if you’re looking for atmopshere. It’s vibrant and a plus if you’re a patio person.

Last week, I had a good friend over for lunch. We decided to make homemade tacos. I’m not familiar with traditional mexican food, never mind tacos. But I guess I’ve developed a Western style of making tacos. 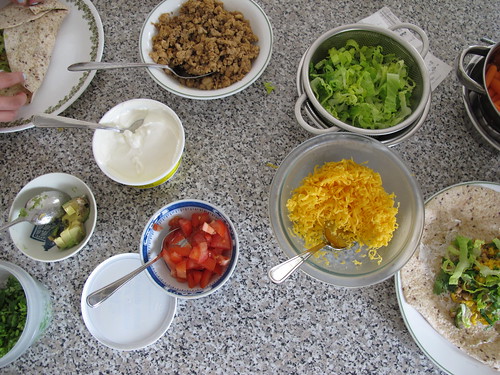 The ingredients are really basic: flour tortillas, your choice of ground meat/ poultry (beef, chicken, pork), chopped lettuce and fresh parsley, shredded cheddar cheese, sour cream, diced tomatoes and avocados. I used ground chicken breasts. And I (somewhat) followed this recipe to season the chicken when cooking it. If you don’t have all the spices that the recipe calls for, tweak it accordingly; I only had chilli powder and cumin. It depends on your taste buds; some like it spicier or less flavourful. Make sure to taste in the cooking process.

When ready to serve, pile everything on a warm tortilla.

Why this menu works?
1. It’s a friendly and hands-on experience. If you have more than one guest coming over; give them something to do; they can dice the tomatoes, chop the lettuce and or shred the cheese.
2. Cleaning up (dishes) is easier compared to others; it’s mainly the prep-ing that takes the most kitchen tools and dishes.