Last week my mom, brother and I headed to the mall. We needed to get something fixed and thought while we wait, we could have some afternoon tea (Chinese style). Basically, whenever my family and I refer to afternoon tea (directly translated from Cantonese), we mean to have a afternoon snack; Mc Donald’s, a doughnut, or bubbletea.

So at Pacific Mall, there are tons of options to choose from; the popular choices are City Hollywood, bubbletea, curry fish balls and Mc Donald’s. And I thought, we always have the same..why not try something different. I suggested that we have a snack at the food court on the upper floor. 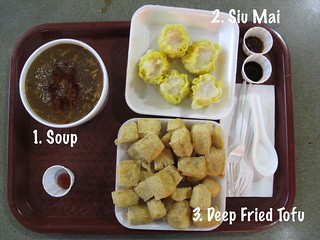 Let me (try to) explain what we ordered..

1. I don’t think I have a clear definition of what kind of soup, but I will try my best to explain. It’s an imitation of shark fin soup. Back in the days (and I guess now too), shark fin was precious and not many people could afford shark fin..so most (or the less wealthily population) used cellophane noodles/ Chinese vermicelli instead of shark fin, hence the use of the word imitation. And adding a splash of red vinegar makes all the difference!

2. I’m sure you’ve heard of siu mai. There are many ways of making siu mai and I think this particular one was made (stuffed) with fish paste.

3. I love some deep fried tofu with a bit of salt seasoning. Mainly because I can’t get my dad to fry me some at home.

All three snacks costed less than $10 (total). I could have skipped dinner that night if I wanted to. : P